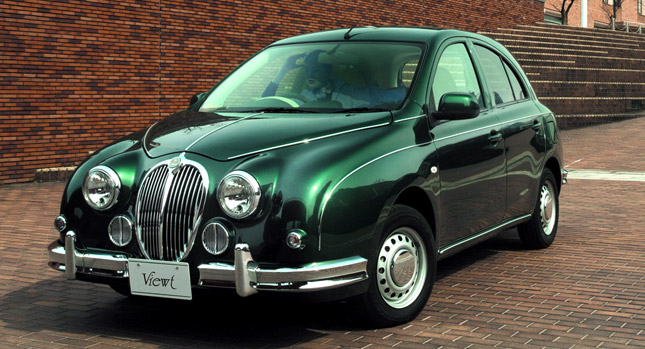 Mitsuoka Motor will display their bestselling model in Japan for the first time in the UK at this year’s London Motor Show at Battersea Park, from 5-8th May.

The Mitsuoka Viewt is a retro styled vehicle resembling the 1963 Jaguar MK2. The first generation Viewt was originally launched by Mitsuoka in early 1993 and immediately acquired a cult status giving Mitsuoka a huge boost in publicity and popularity. This best selling model has now sold over 15,000 units in Japan alone and helped determine the DNA of Mitsuoka in general. Until now, the Viewt has only been available to buy new in South East Asia, but T W White & Sons, exclusive dealer for Mitsuoka Motor in the UK and Ireland hope to showcase the Viewt and see the reception the car receives.

The decision to display the Viewt at this year’s London Motor Show was taken over 4 months ago. Jen White, Mitsuoka Project Manager explained “Older model Viewts from Japan have found their way to the UK via the grey market for the past 20 or so years – so a certain demand is obvious. The only realistic approach prior to making a decision to launch the car in the UK was to ship the latest model over from the factory and to gauge peoples reaction to the design, concept and price. A decision whether to launch the car in the UK will be taken after evaluating the reaction at the London Motor Show.”

The Mitsuoka Viewt in Japan is available in 6 different trim levels, all as a 1.2 automatic. All models are highly equipped and include Anti-lock Braking System, air conditioning, Electronic Brake-force Distribution and Power Steering.

Pricing in the UK is likely to range between £23,000 to £29,000 depending on model variant and specification with a waiting list time of circa 6 months.